So I’ve been pretty scatter brained lately (uuuuh… the last two years…) and making stupid mistakes in my sewing, just from not paying attention. I’ve found that running a mental commentary as if I were making a tutorial really helps me stay focused. So when I was making this, I thought why not just actually make it a tutorial?
Plus sometimes it helps to try to figure out how to put things into words rather than vague hand gestures.
So any C&C would be welcome!

My gramma asked me to make her a new insulated water bottle holder, she had this one she’d bought that either was for her old water bottle or she’d just bought it not knowing if it’d fit or… something. I’m really not sure. Point is it didn’t fit the water bottle she uses now.
Fortunately, we have the same water bottle! This one from Target (coincidentally, we even bought the same colour). So I measured the base and the height and made a mockup for my own water bottle. I say mockup, what I mean is I just went for it 8D;; And made some adjustments to her’s.

Seam allowance is .25″ unless otherwise stated. 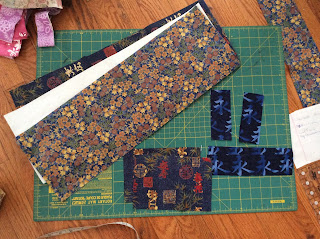 Continued after the break!

So I did my best to make this reversible, but really… I probably won’t reverse it and neither will my gramma. Take the piece of fabric you like better, or you think will be on the outside the most, and pin it all around to the insulation. 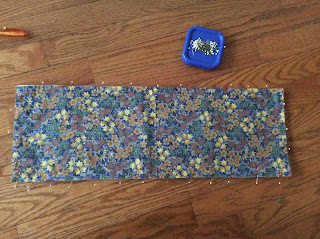 Sew all the way around the edges, you can just baste it. Make sure you’re stitching inside your .25″ seam allowance.
And while you’re at it, sew you’re two base pieces together. 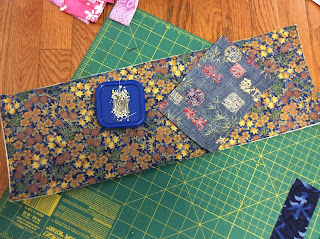 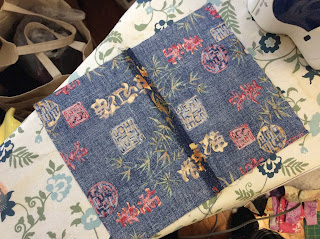 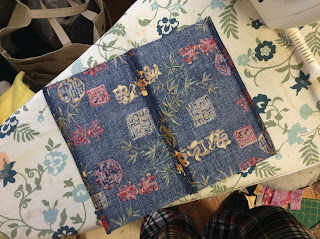 If you didn’t do a center seam, mark your center with some pins.

Mark the center of your insulated piece, I just stick a pin in both sides, I’m not sure you can really see that here. 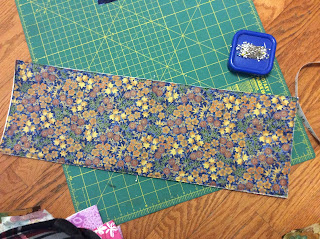 From there lay your base piece over it, matching centers. 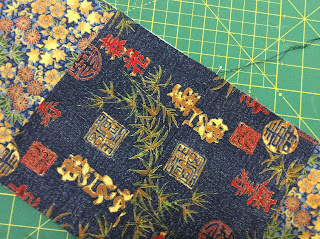 Pin that down, then stitch it down close o the edge. Non basting stitch here, ’cause you’ll see it! 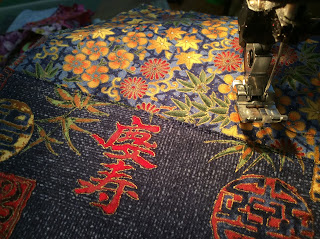 Great!
Now fold that sucker in half, short sides to short sides, and stitch up your long sides. 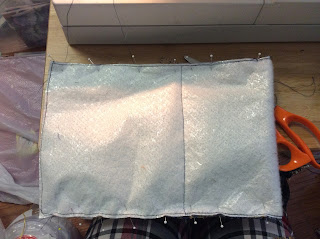 Do the same to your liner piece. 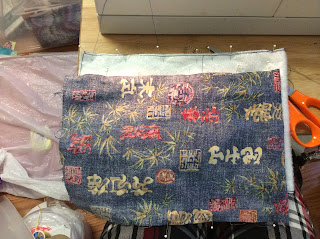 Once those side seams are sewn, pinch the corners flat, measuring 1.5″ from the point: 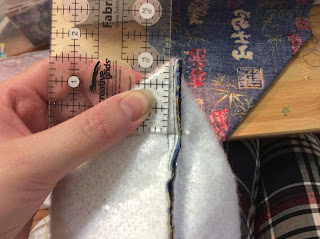 Mark that with pins or a pen, I feel like it’s easy enough with pins, but then my line probably isn’t super straight. 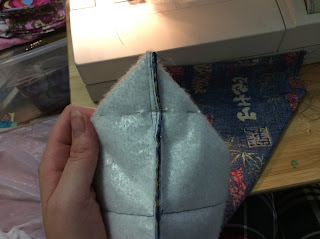 Stitch across that corner, doing the same to the other corner and both corners of your liner. 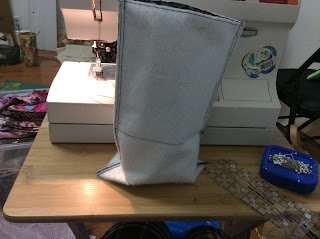 Awesome, it’s a bag!
Snip off all four of those corner triangles approximately .25″ from the seam. 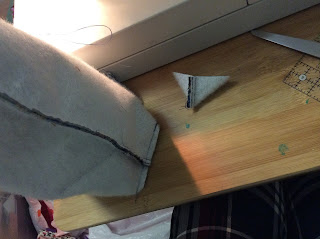 Now turn your attention to the tabs!
Iron a piece of 1×5″ piece of interfacing to the center of your tab fabric. 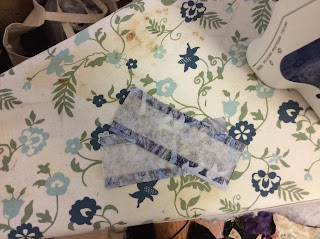 Nevermind how uneven mine is, I just used scrap interfacing 8D;;
Next iron that in half long wise, wrong sides together.
Once you have that center crease, iron your raw edges to it. 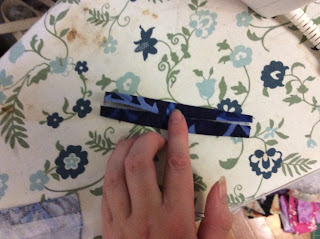 I had to hold it shut for the photo because since I didn’t have an exact cut piece of interfacing it didn’t want to stay whoops.
Now iron it in half again, so the raw edges are enclosed. Pin that up for stitching! 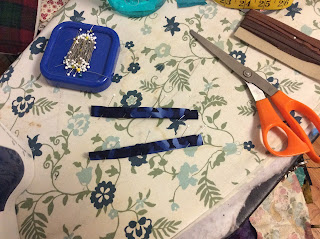 Man that ironing board cover is dirty….
As long as your ironing though!
Grab your liner and iron a .25″ hem in all around the opening. 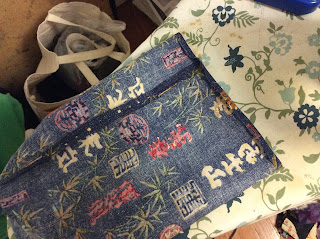 And take your channel pieces and iron in a tiny rolled hem on the short sides. 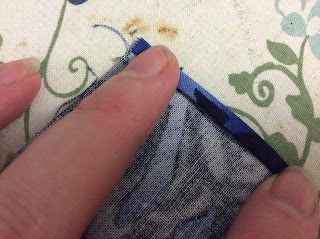 Take your channel and tab pieces to the sewing machine!
Stitch the hem into the channel pieces, and stitch down both sides of your tab pieces. 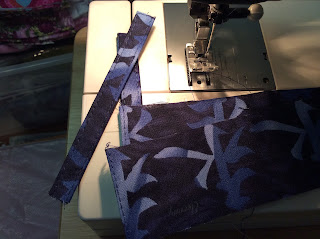 Now fold your tabs in half and just pin them for now. Do the same with the channel pieces, pinning the long side. 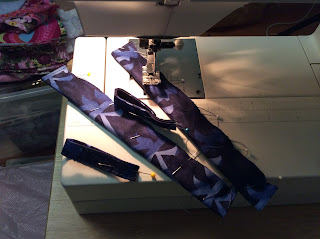 Okay, take your insulated piece and flip it right side out.
Pin the tab pieces at the two side seams, and the channel pieces over that, with the openings at the side seams. 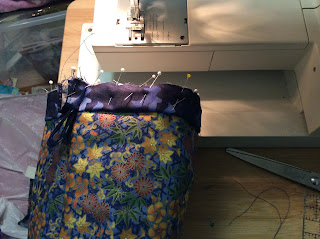 Stitch all the way around that opening, you may want to go over the tab bits a few times.
Press the channel/tabs up and drop your lining in. 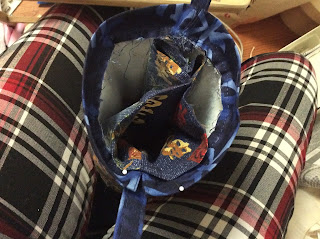 Pin the lining in all the way around, matching the ironed edge to your stitching line, or just over it. 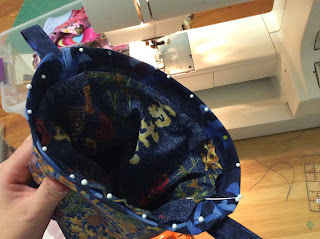 From the outside, top stitch just under the seam. 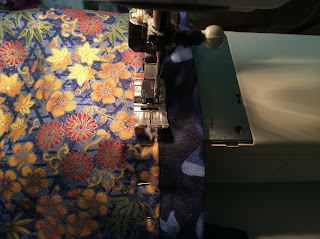 You should be able to see the pins well enough to take them out as you sew, but just in case, I sewed mine holding it like this: 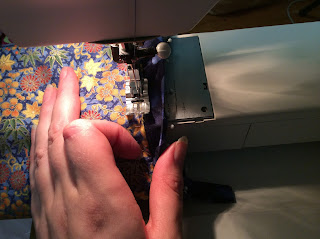 Run your cording through the channels aaaaand, you’re done! 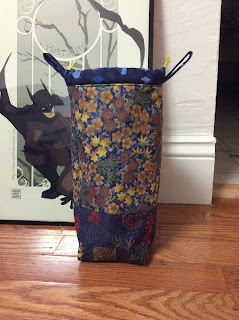 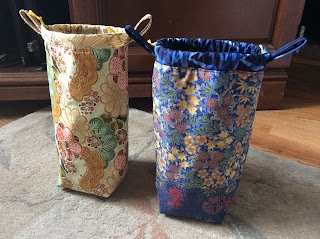 Here’s her holder with mine. Idk why it looks taller, it’s exactly the same size.
Anyway, after making mine I decided that I wasn’t sure how I liked the solid colour, so I added the base to my gramma’s. 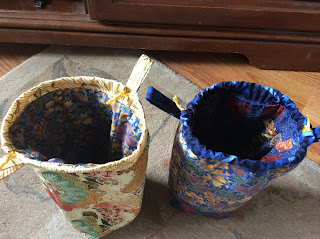 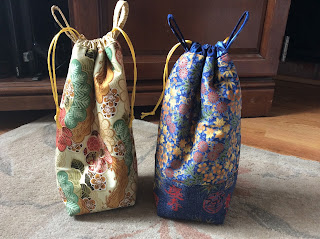 The tabs are so you can hook a carabiner on (what I intend to do) or ad a removable strap (what I plan to make later for my gramma, but don’t have the hardware for right now).