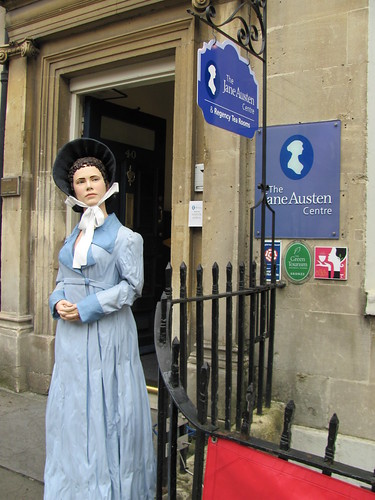 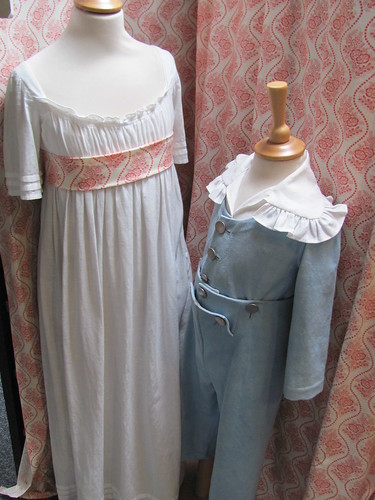 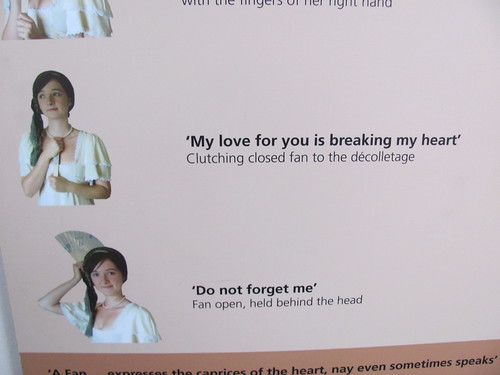 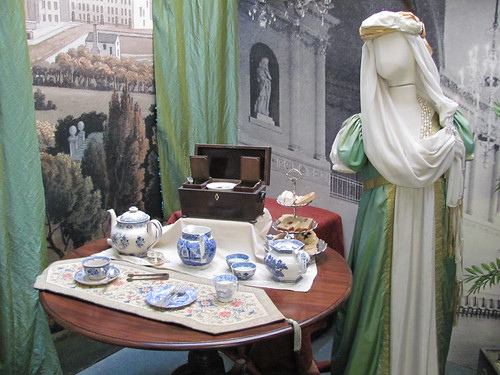 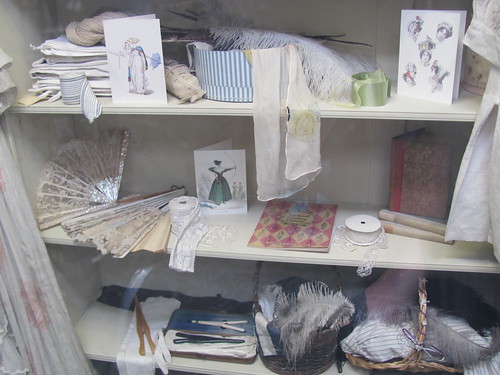 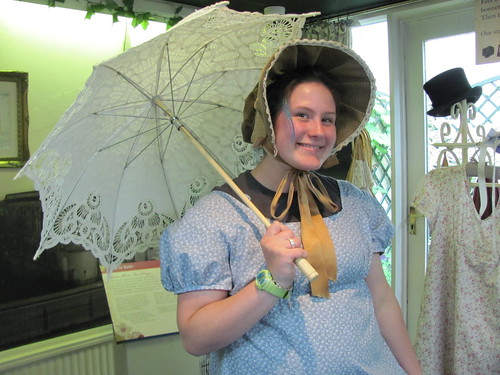 Still at the Museum of Costume, in Bath~
REGENCY ROOM

I really like the sleeve and bodice detailing on this!
Even More Dress Pics (not just Regency though)

And the rows of cording on this one.

Not super fond of the bodice on the dress on the right, but I really like that fabric texture.

This is the bodice, since I figured I should show it if I’m going to say I don’t like it.

Aaaah the shiny, love it.

And the hem on this! I just want to make Regency dresses now.

That hem is more fancy because it’s from a later time. Goodbye Regency Room!
My hands were so itching to just use my gramma’s wheelchair to smash through the glass and explore those bins. That was cruel of them I think, look bins of things you’re probably interested in! Juuuuust out of reach. Thanks museum.
Anyway.

Look, ribbon.
It was in front of a 1830s dress, which I thought was hideous, and thus there are no pics.

Like I’ve seen this style in awesome plaids and stripes, all matched gorgeously through that pleating.

1876, actually not keen on this silhouette.

I like the explosion of details that come with the 1880s

I don’t necessarily want that hem, but it’s interesting.

In Bath, I went to The Museum of Costume, which is also the Assembly Rooms.
I took quite a few pictures, though not as many as I thought I did. The lighting indoors was very dim, to preserve the fabrics I’m sure. That, combined with the glass of the display cases and my none-too-steady hands, resulted in some shoddy pictures, alas. I still uploaded most of them to my flickr, but I’ll just post my favourites here. This is the oldest dress in their collection, from around 1660. It’s silk woven with silver threads. The picture by no means does it justice, it’s quite striking!
Historical dress, hurrah! E playing around with the dress up section. A 60s dress I quite fancied.

Look at those seam lines! Close up on the bodice section of a teens dress. Close up on the bodice of a 2011 Alexander McQueen dress. Gorgeous.
Then we were in the Regency room!

I’ll… split this here. Since Regency is my love.

My friend who I was staying with had exciting per-existing Gilbert and Sullivan plans, so we bussed in to the area and I went to the V&A yaaay.

I think I took this on the way there. Because it screams Why yes, I am in England.

I was quite taken with this statue of Eve.

But we all know why I was reeeeeally there right?

LOOK AT THAT LACE, IS IT NOT BEAUTIFUL?

AND THIS WAISTCOAT. 17th century I believe, I have a pic of the label somewhere.

Sorry for the capslock. NO. NO I’M NOT. TEXT CANNOT CONVEY HOW EXCITED I WAS/AM.

But I’ll dial it back.

Do you see that sleeve detail? Gorgeous.

I reeeeally liked the skirt of this outfit, but with the poor lighting and my shaky hands it was hard to get a good pic. Also, around this point my camera died. And I’d neglected to bring extra with me. So I took pics on my mobile for a bit, I didn’t want to leave. I wanted to soak up every last bit of amazingness. But I did finally run out and find a local mini mart type thing and grabbed some batteries and rushed back.

I used to find this period fairly ugly for women’s wear, but I’ve been watching a lot of dramas of that era lately and there’s some I really adore (particularly this stripey dress seen in everything).

60s! Not a fan of orange at all, but I was really pleased with how accurate, style line wise, my 60s TARDIS dress was.

Loved this ensemble but most of my pics were blurry of it ;_;

Then I think maybe aralias came back and we wandered? Or maybe I’m out of order and this was before we parted ways. Because I can’t imagine why I would have left the clothing section independently.

Part of a tomb~ so fancy and also I like Arabic sooo.

This is a hat.
OF DEATH.
Seriously. Blades. For killing.

This this was amazing! If you wound it up, it would move and the tiger would eat the British soldier. I found it hilarious. Also very pretty.

Japanese porcelain bowl. I want it.

In between sections there was this big wide space that was where they had things in storage, or being worked on, or something like that. He looks so disapproving.

There was a theatre section! Which I hadn’t realized, and aralias took me and eee more beautiful costumes.
That’s Scar from The Lion King.

We were in that section until they turned the lights off on us. Then we had food and parted ways. I bussed back aaaand had an adventure! I was supposed to get whipping cream and strawberries, well they didn’t have either at the Tesco by the museum.
So I asked the flatmates and they thought… Quick Mart? Whatever it’s called, they thought that might have it. So basically, I went out and walked and went into every mini mart type place until I found some (four in total if I remember correctly). It was all very exciting, since walking around and poking my head in places is one of my favourite things to do when traveling.

Mission accomplished I went back and organized my backpack while watching Miranda (which I’d never heard of before) until Katy got back from the show. Then she made me… Eton’s Mess? I think is what it’s called? Whip the whipping cream, cut up the strawberries, pulverize the Very Large Meringue, and yay dessert! It was delicious 😀

So as I’ve been updating my other blog, it suddenly occurred to me that I might cross-post some of the fashion and costume posts here.

And in related news, I’ve been catching up on my travel posts, and am aaaaalmost done, so then I’ll have more sewing posts to catch up on 😀

Anyway!
When I was in England my friends Katy & X took me to the Fashion and Textile Museum, which had (and maybe still has) a Pop design exhibit.

Absolutely loving this sleeve design, and completely intend on ganking it into something soon.

This dress was from the 60s I believe (I took a picture of the label, but I don’t have it handy) and I really like the seam lines and the flow. I took a lot of pics of it and intend on replicating it.

I have an incredible weakness for stripey jackets ;_;

It’s Jo’s outfit!
Seriously, very similar to the outfit she wore in promo pics.
Not very fond of it on her, but I did really like this outfit.

Alarm clock/radio!
I want it.

The designers name is completely escaping me now. But you may recognize it.
There were a few other dresses I would really like to replicate, and now I think of it I think they were all 60s… but early 60s so they had a bit more of the 50s silhouette.

Basically I went blah blah blah seam lines, I want, stripes, jackets, blah and Katy was wonderful and humoured me.
Then we went nextdoor where X was waiting at the tea shop and yaaay had more tea!

(They had the direct line to my everlasting devotion, historical fashion and tea, together!)